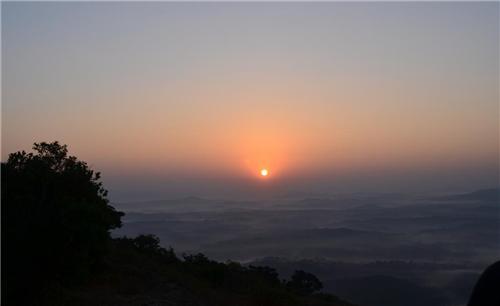 Agumbe, a small village of Udupi hidden in dense jungles of Western Ghats is popular for its sun set point. Now there are many sunset and sun rise points across the country you might wonder what makes it so special. Witnessing the panoramic view of a huge orange ball of fire dipping in vast Arabian Sea, which is around 40 kms from Agumbe, can be a treat of a lifetime.

Agumbe is situated at an elevation of 826 meters right above the Someshwara Ghat. It comes in Malnad region of the Shimoga (district) of Karnataka state. Udupi is 54 km from Agumbe and the Sunset point is located at 14th, which is about 2 kilometers outside of Agumbe. A raised platform has been created for the visitors to enjoy the perfect sunset view. For a better view you can choose to climb a steep flight of stairs and can find solace in company of pristine nature.

The best time to visit Agumbe is during monsoon, which is from July to January. It is during this time of year when the ghat is full of dazzling streams and numerous waterfalls like Barkana Falls, Onake Abbi Falls, Kunchikal Falls and Jogigundi Falls. Actually these are some of the popular ones from the group of many. Kunchikal Falls are the highest waterfall in India, at a height of 1493 feet.

There are not much places to stay at Agumbe as it is a small hill station. You can find several hotels in Udupi which offer both luxury and budget accommodations. Apart from the sunset point other tourist attractions of the place are the mountain and forest trekking and very old Gopal Krishna temple. It is the only rainforest research station in India. Agumbe is also famous all over India because it has the nation’s first automatic weather station. The station is solely dedicated to monitor climate and weather changes in the rain forests, which has all been made possible by the hard work of well known herpetologist Dr. Romulus Whitaker.

It is worth mentioning here, he is also the winner of the Whitley Gold Award. There couldn’t be a much more significant contribution to the environmentalists to study the rich and unique biodiversity of the country. Receiving the 7,640 mm of mean annual rainfall, the second highest annual rainfall in India, Agumbe is also known as Cherrapunji of the South.

‘Hasiru Honnu’ is another name of Agumbe Sunset Point which means green gold; as it a place where you will find some rare species of medicinal plants like Diospyrous, Eugenia, Listsaea, Hoiligarna, Myristica and Ficus. The place is rich in biodiversity, and borders one of the last surviving lowland rain forests. mile as it is commonly known as and Ever wondered about people how lucky they are who live in such place so close to nature? Probably that is why the malgudi days came alive in these jungles only. If you happen to trek in agumbe ghats you will be able to see a hundred year old house of our beloved swamy of famous malgudi days.

Agumbe of Udupi is becoming a place of adventure, a paradise for trekkers who love to align their wildness with jungle’s wilderness.


Explore more about Tourism in Udupi