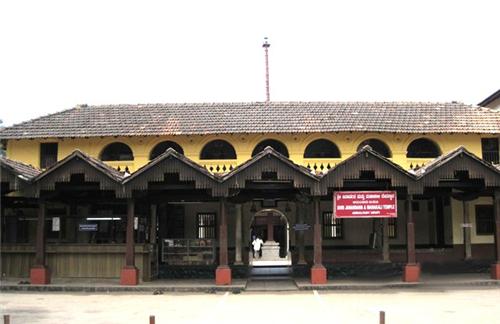 Ambalpady, also known as Ambalpady is a holy place located in the Udupi town, famously referred to as the land of Lord Sri Krishna. Ambalpady is situated about 3 kilometers from Udupi bus-stand and in as way can be considered as extension of the Udupi town. It is located in the coordinates of 13?20'11"N, 74?43'49"E. Ambalpady is basically known famous for the Sri Janardhana and Mahakali temples which lie side by side. It has been growing in popularity as a religious and cultural center of pilgrims residing in the coastal belt of Karnataka.

As the name suggests, Ambalpady is dedicated to the Goddess Mahakali. Name of the village too is derived from Amba; another name of Shakti and ‘Padi’ meaning hillock or forest in Tulu (local language of Udupi). The name Ambalpady means Ammana Padi (Woods of Amma).

Along with the Mahakali and Janardhan temple, Ambalpady is also famous for other temples namely, Anjaneya temple and Raghavendra Swami Brindavan. As the story goes, it was year’s back that lord Janardhana Swami came to Ambalpady in search of Goddess Mahakali. During his stay in the village he protected the devotees from devils. And thus, Lord Janardhana became the main deity of Ambalpady whom the people of Ambalpady loved dearly and respected. Since then, Mata Mahakali is also worshiped along with lord Janardhan in the temples of Ambalpady. The nearby cities located to Ambalpady are Malpe Port, Udupi City and Manipal.

If you think that a little detour from Udupi will cost you much, then get rid of any such perception because reaching Ambalpady is very economically feasible. You will find numerous bus services from Udupi to Ambalpady; both Govt. and private. Cabs as well as auto-rickshaws run frequently too and you will have no problem at all in getting around the city. Buses have a fixed route but stops at various locations throughout the city.

Don’t give Ambalpady village a miss. You will enjoy the holy place thoroughly and if you are lucky to have a good weather your experience is going to be one you are going to cherish for the rest of your life.