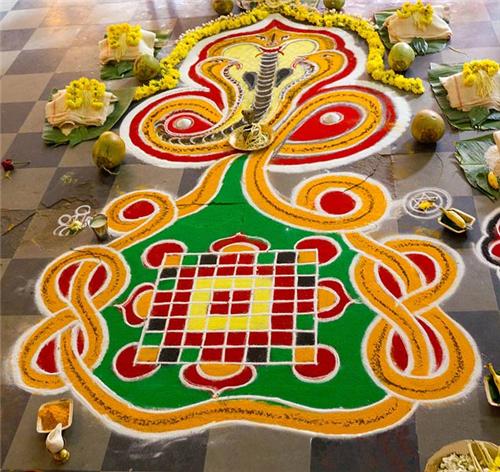 Religion has a deep bearing on our lives. We may claim to be atheists, but some part of our minds will always cling on to a belief. The world has seen the growth and propagation of several faith and religions. Some have acquired roots in our belief for a very long time. Others have not been so persistent. Every religion has a set of principles or practices that defines a correct way of life.

Hinduism is a faith that has been adopted by over a billion people. The religion dominates in the subcontinent of India and some other parts of Asia. The Gods worshiped in this religion are countless. From animals to natural forces, it is rare to find a creation without a Hindu God associated with it.

There are several representatives of the animal kingdom that find mention in Hindu scriptures. Snake is among the crucial. It is in this regard that Hindus hold the snake in high reverence. The Ashlesha Bali is worship to the snake God. This ritual is popular all over India, especially in the southern states.

The Significance of Ashlesha Bali

This ritual is significant since it is done to honor the snakes. In fact, there are two forms of prayers done with regards to snakes. The other one is Nagamandala. Ashlesha puja is done to pay homage to Lord Subramanya.

The pooja can be performed only on one day of the month that is Ashlela Nakshatra. It is commonly believed that when conducted on any other day the ceremony is deemed useless. Certain months are considered more auspicious than others.

The ritual is aimed at freeing oneself from the Sarpa Dosha. With regards to the ceremony, Ashlesha Bali is not a very long one. The entire schedule can be expected to take just over two hours. The ceremony is not too bright either. In contrast to Nagamandala, this ritual is a solemn one.

Importance of Ashlesha Bali in Udupi

Udupi, being a Hindu dominated city observes widespread popularity in the celebration of Ashlesha Bali. Temples that specialize in snake worship such as the Saarvajanika Naga Brahmastana observes the ritual in accordance to the scriptures. The temple situated at the heart of Udupi city is an ancient one, which has over 200 years of history. The temple is an ode to the snake God and alleviating sins associated with snakes

The traditional ritual of Ashlesha Bali stands as a testimony to the varied beliefs of human in general. The simplicity of the pooja makes it popular across all segments of the society. If you want to experience Hindu rituals at its best.