Know About Basrur Village near Udupi 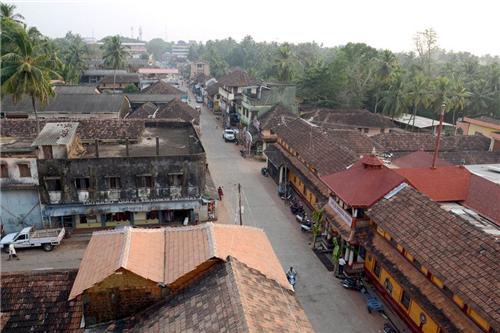 Basrur is a beautiful village of Karnataka. The village was also known as Vasupura during earlier days. The town of Basrur is situated on the banks of Varahi River. It is geographically located on the Kanara coast in Karnataka. It served as an excellent rice port of the coast for the whole sixteen century and first half of the seventeen century. Due to its efficiency the port was also used by several traders of different foreign countries.

Their main purpose for using Basrur port was to fulfill the needs of Keladi Samsthana; a town near Shimoga. Like other towns of ancient days this town was also distributed or we can say was divided in different communities. Artisans, weavers, Traders and dancers were the main communities of the town. But the town also shares a sad history, there was a time when Basrur town had communities which were experts in entertainment especially singing and dancing but the sweet odor of the art exists no more today. The town has now become just an obscure where there are no more different communities, no art and no traders.

Moroccan Traveler Ibn Batuta who’s full name was Abu Abdullah Mohammed, born in 1304 and died in 1358 during his travel account visited Kanara while he was heading towards Malabar from Honavar quoted on the town, "When we first entered the land of Malabar there was a small area covered with beautiful palm leaves and a huge growth of coconut plums.’. In his description of the town he also highlighted the quality of the town.

Mahalingeshwara Temple is most known and attractive temples amongst all others. People of Basrur celebrate annual Ratha festival (ratha or teru means wagon in Kannada every year with grandeur. They celebrate this with full enthusiasm on every year of April (day of Chitra Porrnima - Hanuman Jayanti as per the Hindu calendar). It is famous all over the world. Basrur remains a trading center but it is more famous for its old temples; Shree Mahatobar being one of the most famous one.

The GSB community considers the town as a spiritual center because Sri Mahalasa Narayani temple is situated in this historical town. Therefore the community considers it a holy destination. Every year, these hundred year old temples see the presence of leaders from other Mutts like Kashi Mutt Samsthana and Gokarna Parthagali Mutt. The traditional story is that the principles of the Mahalasa temple was taken from its Moolasthana, i.e. Sri Mahalasa at Mardoli in Goa.

The town reveals another secret to its visitors. When you will visit you will come to know how during ancient time the Basrur people used to entertain their king. Visit to lots of temples, old mosque, sculptures, stone writings (Shila Shashana), ponds etc. shows us that there were many things activities in which the kings used to indulge.

There are in all 24 temples present in the Basrur. A 12th century inscription is the earliest inscription which mentions the historical importance of The Nakhareshwara temple, also known as Mahalingeshwara temple which was beautifully carved by a medieval South Indian Merchant can be found in the temples.

After getting through its art, culture and temples there is still one thing which is remains to be explored and i.e. how Basrur lost its significance. It is really exciting to know that Basrur was famous for education and culture. The nearby villages considered Basrur as a center for their daily trade and commerce activities. Another evidence shows that the town was enriched with quality entertainment activities and even a movie theater. This was there during the ‘black and white’ era of Indian cinema. Since, there was no proper infrastructure for changing the present circumstances Basrur hence it lost its importance.

Roads, drainage systems and drinking water facilities which are the basic requirements to survive especially in the hilly areas were not available. Like other villages even though after introducing Mandala Raj (Panchyat raj) the Government failed to bring little changes in the living conditions of the people of the town.

Talking about transportation facility it is hardly 2 kms from Kundapura railway station. Water transport facility such as wooden boats is controlled by local fishermen but this mode was predominant only in starting of 20th century. Therefore a bridge connecting Hattikudru to Basrur and also Anagali to Kundapura will make a difference. Its really sad to know that people of Hattikudru depends upon water transport even during heavy monsoon season.

So all we can say that is a Basrur is a beautiful village with great history and it will lead you to a world.