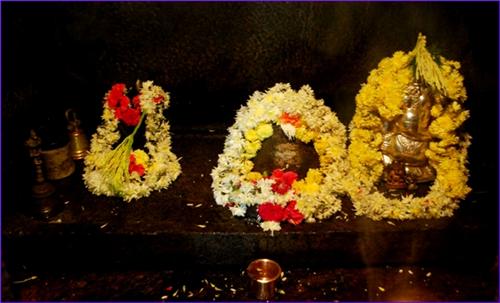 Kallu Ganapathi Temple is known to be an architecturally aspiring, beautiful looking and one of the oldest temples in the Shriyara village. The temple constitutes of three statues of lord Shiva, Parvathi and Ganesha. Temple is inside a rock cave. The entire temple is surrounded by green herbs, shrubs and grasses. You will observe that the temple is well preserved by the Late Thimmappa Adiga's successors who are eminent performers of the temple activities.

The major sanctorum is near the figure of Lord Ganapthi in silver standing posture. The Ganapthi statues has four hands of which two arms represents the ‘varada hasta’ denotes inclination to worldly things and the other two hands Kallu Ganapthi signifies salvation. Lord Ganpathi is offered prayers in the form of the Tulabharam ritual. It is a sacred Hindu ritual where in the devotees weigh themselves on a weighing scale and offering their equivalent weight in the form of gold, fruits or other expensive grains in the God’s name.

There are numerous sculptural depictions from Bhargava Purana. Many people come from far away places to seek the holy blessings of Lord Ganesha. Ganesh Chaturthi; the festival where Lord Ganesha is offered prayer is celebrated with great pompous and splendour. Lunch is served to all the devotees visiting the temple and is called the Prasadam. The Prasadam includes milk, sugar, dal and honey. Devotees who are from distant places are provided with food and shelter.

Special Pooja is performed three times a day; in the early morning at 5 am, afternoon 1pm and night 8.30pm. This temple is open and welcomes devotes from morning 6 to 9 am. Devotees pour in especially on Sundays, Tuesdays and Fridays. You will also find a lot of crowd during the famous festivals of Chowthi, Sankramana and Sankashtahara Chaturthi. The annual festival of Rathosava is a huge attraction. It is famous all over India and held on Margashira Chaturthi every year. Other special poojas like the Sathya Ganapathi Vratha which is done during a marriage or by individuals who wish to meet their soul mates is also performed at the temple. Lord Ganesha is made offerings of sugarcane, coconut, fruits, apoopa, modakam and Kadubu during the ritual.