When we talk about Udupi, the first thing that runs across our mind are temples, the rich and unique culture, delicious Kannada cuisine and more; but other than these, there is one more thing which has given Udupi a worldwide fame and it is Kambala; a famous traditional race, where buffaloes run on muddy fields guided by there riders. It is very near to the hearts of the people, especially from the rural backgrounds, who are mainly into agriculture.

The group organizing the yearly race is known as the Kambala Association. About 18 Kambala festivals has been held till now under the supervision of the association. Not only in big villages but also in small villages like Vandaru, Galvadu, etc. the race is performed with the same enthusiasm and spirit. The field used for the purpose of the race is about 450 feet long. 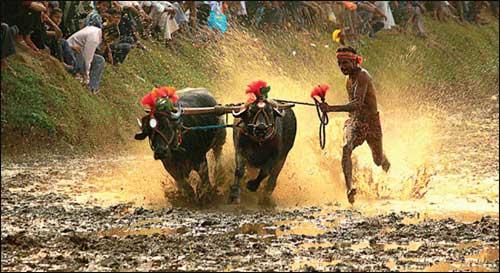 The main aspect of this game is the selection of buffaloes. It is believed that according to logic of astrology the buffaloes must be of only either black or red in color. One pair of black and another pair of red is known as Kalle and Bolle respectively in local language. Every game has a finishing point which is called Manjotti.

Origin of the Kambala Sport

Udupi was ruled by the Alpa kings from the 12th century to 17th century. It is them who introduce this sport. It still continues in the region with same energy and zest. Though the only difference is that it was held in a more grandeur manner than today.

Rules and Regulations of Kambala

There are few rules and regulations of the sport which are followed strictly. Firstly, the race can only be performed on wet fields (at least one foot in depth). The race is held between the months of March and November i.e. after the first harvest and before second harvesting season comes up. This race is performed mainly in the coastal areas of Karnataka and being a huge event, there are particular groups of people dedicated to manage the proceedings of the race without any obstructions.

Secondly, buffaloes don't run themselves, they need a rider. For the same farmers undergo tough training and are called the 'whip lashers'. In earlier times the winning buffalo and farmer was rewarded with coconuts, but today, winners are awarded with either gold or silver coins. The reason behind the increase in the value of the prize is the increased popularity and fatality of the game.

Today the sport has turned into a huge business and hefty bets are placed by people to win and earn some extra money. If you are making up your mind to attend this even then you can expect yourself to be a part of a crowd of about 20,000 watching the event unfold at same time. You can hear roars of spectators cheering and encouraging buffaloes to complete and win the race as fast as possible.

Previously it was done only for the sake of tradition and entertainment but now this has taken place of a huge competition which people wait for this throughout the year. Every year this sport is incorporated with new innovations and changes. Also as the race is held during night, proper arrangements of strong lighting is made so that the farmers can have a better sight of the charging buffaloes. The sport is also covered in regular local tabloids and leading newspapers. Bola Chittaranjan Das Shetty was the first man to write a document on Kambala sport of Udupi in 1983. The description was drafted in local Tulu language.

Kambala is more of Tradition

For the people of Udupi, it is a significant event. Farmers start training their buffaloes from the very beginning; almost from when they are calves. They even separate the arrangement for normal cattle and the buffaloes going to run the race. Buffaloes under training have a special diet regime and a different pool of water is constructed for them.

But this whole tradition is highly opposed and unanimously criticized by animal lovers at large. Mrs. Maneka Gandhi (a well known animal activist) has shown great concern for poor buffaloes which are ill treated in this sport just for the sake of entertainment. The Government officials are also suggesting people to behave properly and avoid use of leather strip (whip). Animals are also God’s gift therefore one should be kind towards them.