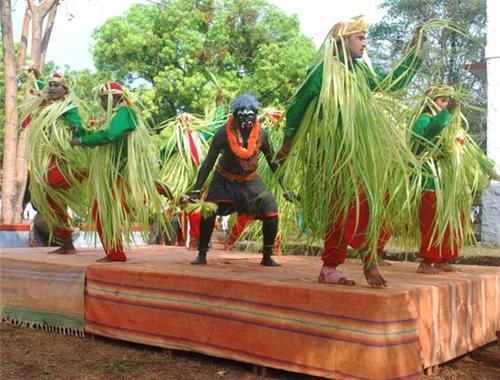 Udupi is fondly known as the 'temple city' as it has a number of famous temples and people from all over the world come to visit these temples. But, what very few people know is that Udupi has many more things of interest and tourist attractions other than just temples. The Kangilu dance form for example, is a very famous form of traditional folk dance rooted in Udupi. One can find it being performed in Udupi as well as Mangalore Taluk. There is a special community which performs this dance and they are known as Mundal and Gowda communities. This dance is performed only on a full moon day. The dance is not popular in every part of Udupi; just in some regions only. It is also a devotional dance and hence it is largely appreciated by local people having strong belief in religious ceremonies.

Like many other dance forms in Udupi, the Kangilu is a spiritual and powerful form of dance performed by trained people. The beginning of the dance is done by offering pooja to the Goddess Durga. People say that when they join their hands to pray to the Goddess, they feel an internal power in themselves which is very magical and an experience hard to express in words.  The pooja is performed in a very traditional way. The priests keep everything in their minds regarding the consecutive steps of performing the pooja and perform pooja in a very systematic manner. After completion of the pooja dancers get ready to perform this folk dance. Dance lovers will know the difference; it is not pure dancing, it is a dance act.  You should definitely plan to go there and feel the power within yourself.

There are 5 – 12 members in each group. All the 12 people wear the same kind of Vesha i.e. they have the same costumes and characters to play as the other members of the group. They not only wear heavy and colorful dresses but also paint their faces with attractive colors. The village people highly respect this dance form and they believe eternally that this folk dance helps them to keep all diseases, evil powers and other negative energies away from them. Therefore, they follow it with same devotion as of Mundal and Gowda.

After the dance gets over, rice and coconut is cooked by the people not in their houses but outside their homes and is offered to the Mari God. It is performed with the same level of enthusiasm and zest every year by the people of the village without fail. People also believe that if it is not done regularly every year then numerous problems will arise and lead to destruction of the village. Hence, they make it a point to perform Kangilu Kunitha to protect themselves and the village from evil things.

During the performance a traditional song is played. It is called the Karungilo and at the end a song called Aati Kalenje is played. Another reason for performing and celebrating it as a festival and great occasion is because it creates peace, harmony and healthy atmosphere in the village. It is like the whole of Karnataka gathers during this day to have a glimpse of the pooja and the dance performance. They pray of wealth and health of their families. Although it has huge significance and is celebrated with great grandeur in the society, somehow its significance is becoming rather weak in the present generation. You will rarely find people who know about it outside Karnataka. Even the whole of Karnataka does not know about it. Therefore it is much needed to make it more popular and to preserve it as a precious tradition. It should be done with great enthusiasm every year.