Karnataka and its temple have always acquired place in people’s hearts. Udupi district of Karnataka has an important pilgrimage town known as Kollur. It is renowned in world for its temples.

Kollur is included in the list of seven pilgrimage centers in Karnataka. It was craved by Parashurama (an important mythological figure of the Hindus). The construction was done on the banks of never ending Souparnika River. A perfect scenery is painted near the temple as it provides a clear view of Kodachadri peak. It is a renovated temple therefore people have a strong believe that the old temple is in the Kodachadri peak.

The reason for creating the temple in Kollur is because it is next to impossible to reach Kodachadri peak. There many other places which are worth visiting such as Arasina Makki (waterfalls), temples like Udupi Sri Krishna temple, Shiva temple, Murudeshwara temple, Shringeri Sharda temple, Dharmasthala  Manjunatheswara temple, Kukke Subrahmanya temple, Kudroli Gokarnatha temple, Mangalore Mangaladevi temple etc. 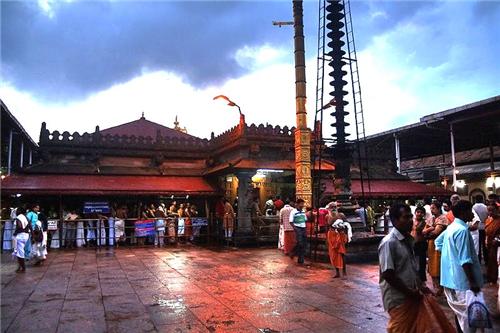 The temple is called Mookambika temple because the deity worshiped in the temple is Goddess Mookambika. The Goddess is in form of ‘Jyotirlinga’ containing Shiva and Shakti. The idol is carved by Shri Adi Shankaracharya. There are many other sacred places around the Mookambika temple. The temple was renovated and made as good as new by a Keladi ruler. All the shrines present in the town catches attention of a huge number of pilgrims from different parts of the world.

There is a myth regarding the worshiping of Shiva and Shakti together. It is said that there used to be a monk who decided to impress God and did penance on Agnitheertham (name of the rock). Lord Shiva was very happy with his devoted prayers and appeared before him. All the great Maharashi (monk) demanded was goodness of mankind nothing more. Lord Shiva was quite impressed with his worship and decided to grant him a wish. So he said to him that Swayambu Linga will come there and the Rishi will get an opportunity to pray him. The monk also expressed his wish of worshiping the Devi too. It is then that a golden line (Swarna Rekha) appeared on Lingam signifying Shakti.

So if you are going Kollur don’t miss these temples. They also carry historical importance because of their architecture and carvings.

You can go there by taking direct buses from Bangalore, Chennai, Guruyayoor, Kottarakkara, Kannur and Shimoga. If you are traveling with your own vehicle you can take NH17. The nearest railway station is Konkan.

If you are planning for something adventurous then Kollur is place to go to. It gives climbers a chance to climb Kochadri hills from the Hidlumane falls and also gives the opportunity to trek in the deep and dark forest of Arshani Gundi.

The climate is remains favorable and does not reaches the extremes. But beware of leeches in the forests especially in the rainy season.