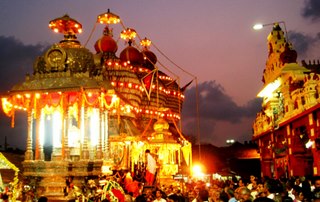 South India is known for its rich cultural heritage in the form of Temples – dedicated to God Krishna and Lord Shiva. The state of Karnataka has especially marked its significance in this context. The two most ancient temples found in Karnataka are the Annantheshwara Temple and the Chandramauleshwara Temples, situated in Udupi, a small town located 60 kms away from Mangalore.
The Anantheshwara temple dates back its existence to the 8th century, anciently known as 'Mahadeva’ of Udupi. Located in Manjeshwar, Udupi, the temple is also known as 'Manjula Kshetra' and 'the temple of 18 towns'.

This place was anciently known as Sivalli. Locals also called it Siva-belli and sometimes even Rajathapeetha Pura. History has it that Ramabhoja who was an ardent follower of Lord Parashurama was crowned the king of this place, hence, the name Rajathapeetha Pura.

Once, Ramabhoja wished to perform a Yajna. In the process of performing the Yajna a snake was sighted and got killed by mistake. To free himself from Sarpa Dosha (sin of killing a snake), the king decided to make a Silver Pedestal (Rajatha Peetha) which would have images of snakes carved on it, as instructed by Lord Parashurama.

Architecture of the Annantheshwara Temple

There are four Durgalayas (Durga temple) and Nagalayas (Subramanya temple) in the temple. The temple has very intricate carvings in wood and stone and the altar can be very well considered a master piece of art.

Tradition followed at the Annantheshwara Temple

From time immortal, the Shri Anantheshwara Temple has been famous for imparting rich lessons of the Vedas, the Vedanta, and the Upanishads. It was here in this very temple where Shri Madhwacharya is said to have obtained his lessons from his Guru Shri Achyuthaprekshacharya. Anantheshwara  is explained in detail in Shri Skandapurana.

Best time to visit the temple

Chilly winter season is the most preferable season for roaming around the city, i.e., from December to February. This is the best season to visit Udupi as you will experience a pleasant atmosphere. Monsoon is also considered the best time to visit Udupi as people get to see greenery beauty all around.

Transport service is widely available to the temple from Hubbali, Bangalore and Mangalore. You can travel either by bus, taxis or auto rickshaws.