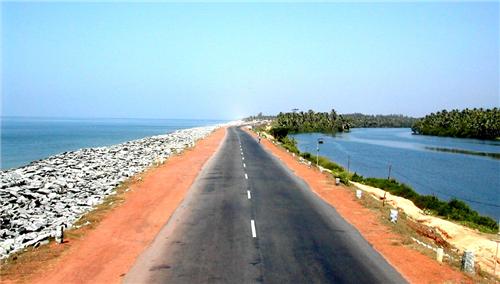 Karnataka is a beautiful state known for its numerous temples, tradition and culture. But Karnataka also has something great for its visitors, which gives them a complete view of abundant natural beauty. Maravanthe Beach near Udupi is one fine example of it. It is a beach attached to a village situated near Kundapur.

The beach is just 55 kms from Udupi, so if you're planning to visit then taking NH-66 will be the best idea which will take you straight to the beach. There is a river named as Suparnika which flows near the beach so you can enjoy the magical scene created by both the river and the sea; a unique combination.

The Maravanthe village also has a temple known as the Maraswamy temple which is very near to the beach and is also a common spot for visit for the tourists who come to spend their time on the beach. In the temples in Maravanthe maintains three Garbha Grihas for the deities, as these three Gods are their major deities. One of the temples is called Varahaswamy, which is devoted to Varaha (the wild boar). Images of tortoises, crocodiles and fishes are carved on the rocks and are also worshiped in this temple. The temple is covered with beautiful palm trees on the east side. Kodachadri peak is also visible easily from the temple premises.

Lives of the People in Maravanthe Village

Although the area is not developed for trading of sea products but a large number of village people depends on fishing activities as their main source of livelihood. Fishermen use tiny boats and diesel trawlers to catch fish from the sea. But during monsoons the sea activities comes to a halt. Other than fishing people of Maravanthe also depend on agriculture as other source of income. Coconut, paddy and onion are considered as main crops of the region.

The beach and the temple create a spectacular picturesque scene for tourists. The Government of Karnataka also has its concern about the place and has invested in renovations to boost the tourism value of the spot. They are trying hard to develop the infrastructure to attract people from all parts of world. Although the place is full with beauty but people generally lack their interest because of lack of proper staying facilities although, one can find good accommodation arrangements in Kundapura.

Another amazing feature of beach is- it is less crowded and less commercialized. You can enjoy scuba diving and snorkeling in a peaceful and serene atmosphere.