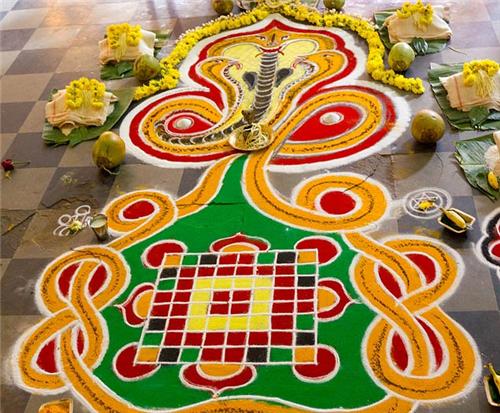 Nagaradhane ritual is an old and valuable tradition of Udupi. Basically, it signifies worshiping of snakes. There is large group of people who are ardent followers of the ritual and strongly believes in the tradition.

In the minds of people snake has its place as a unique creation of God. In Hindu religion, especially for Brahmins worshiping of a snake is nothing new; they have been doing it for centuries now and practicing the ritual since ages. They consider it as a mark of good omen. Other than Karnataka snakes are worshiped in other parts of India too. During the festival of Nagarapanchami milk is offered to snakes throughout India.

In Udupi each house is believed to have a snake to which they offer their daily prayers. No one is allowed to kill or harm a snake when in sight. If by mistake someone commits a mistake he/she has to undergo a vigorous ritual of cleansing and purifying. There is no scope for one to deny the process. If one refuses to perform the ritual it is said that the person is cursed for rest of his life. In Karnataka there are a large number of people depending upon agriculture and for them snakes are a sign of fertility. It is their belief that it is the snakes which save their crops from being eaten up by rats, beavers etc.

Aashleshabali and Nagamandala are the two rituals practiced which are entirely dedicated to snakes. Nagamandala is a larger and brighter festival of celebrations than Aashleshabali. A cultural ceremony is performed two priests; one holds the flower and other one act as a female dancing snake. Dakke is an instrument played during this ritual. Snakes drawings are carved on the holy ground and painted with five different colours; white (mud), red (mixture of lime and turmeric powder), green (powder made of leaves), yellow (pure turmeric powder) and black (paddy husk).It is performed from dusk to dawn.

Sarpam Thullal and Sarpam are same type of rituals worshiping snakes performed in Kerala. People show great respect for snakes in the region. Talking about Aashleshabali; it is small ritual performed after death but it has acquired its own significance.

Nagabanas or ‘forest of snakes’ have a huge importance in Tullu Nadu’s culture. Cutting of tress in this area is strictly prohibited which also supports the cause of environmental enrichment at the same time. The practice has made a huge contribution in protecting medical trees in Tullu Nadu. Unfortunately the tradition is gradually fading away. With the globalization, Nagabans have vanished. Still, some sections of the people have not given up and are trying hard to preserve it so that the Nagabanas can be maintained for the use of future generations.

It is really a golden opportunity to visit there and have look at the holy ritual being performed. In India snake is considered as an important reptile and has great significance in Indian culture. People consider worshiping snake a holy act which makes a person pure and promises his place in the heaven.