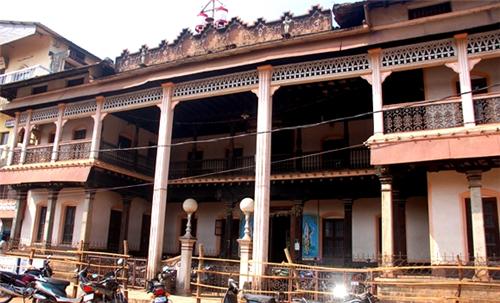 Udupi, a newly born district out of the Dakshina Kannada, has a diverse cultural heritage owing to its history of having been adopted by the famous philosopher and preacher; Madhwacharya who later founded the Ashtamathas.

Sri Madhvacharya belonged to the Dvaita school of Hindu thought. The underlying principle of Dvaita philosophy stresses on the distinction between God – the supreme soul and individual souls that of being humans. Each of the Mathas founded by him had one of his direct disciples to be the first Swamiji of the temple chosen the by the philosopher himself. It used to be mostly one of the favorite disciples of Shri Madhvacharya. Palimaru is a small village in Udupi which is blessed to have one of the Ashta Mathas of Udupi as mentioned before.The Matha at Palimaru had Sri Hrshikesha Tirtha as its first Swamiji.

The village of Palimaru is 35 kms away from the famous pilgrim town of Udupi, which is only 10 kms off the NH 17.

What is a Matha?

According to a definition on the web a Matha in Hinduism is a monastic establishment of those individuals who have renounced the world, also known as Sanyasis. In other words, a Matha is synonymous to an ashram and such establishments are found both in Hinduism and Jainism. Except in Jainism it is somewhat more formal and bounded by rules and regulations than an ashram of the Hindus. The Mathas throughout South India belong to the Dvaita shool of philosophy, established by Sri Madhvacharya.

The Matha at Palimaru

You can find the Matha in Palimaru on the banks of the river Shambhavi. Along with the river the Matha also has a Rama temple and als you will find in the near vicinity a Hanuman temple; that of lord Rama’s ardent follower. The Matha has the idols of Kodanda Rama with his ardent brother and follower; Lakshmana and wife Sita. These idols are known to be gifted by Acharya Madhva to Sri Hrshikesha Tirtha. These idols are worshipped very piously by the resident here. The idols of Lord Rama Lakshmana have bows and arrows in his hands while the idol of Sita holds a lotus in her hand.

Apart from worshiping, the Matha also provides the visitors an opportunity to stay there and become a part of all the activities carried out there. The surroundings being so peaceful and vibrant you forget all the worries of the outside world once you enter this blessed place. You can very well feel the divinity and tranquility all over the place. The Matha offers all the visitors food which is known as Teertha Prasada and all the facilities for worship known as Shradha.

How to reach there:

Udupi has well organized transport facilities available which enables you to visit the nearby destinations without any harassment. Once you land up at Udupi you can easily reach the Matha using the local transport available.

You will find many hotels in Udupi depending on your budget. You may also opt to stay at the Matha, which provides a community hall for all the visitors but you have to share the hall with others as well.