Udupi is a land of spiritual, religious and mythological legends. In this western coastal land of temples we can find many holy places, many hills of religious importance and many scared water bodies and most of them carry a mythological story behind them.

Sowparnika is yet another similar holy river which floats across Kundapur and Gangolli. The devotees of famous Mookambika temple consider a dip in Sowparnika River auspicious. It flows in front of the temple which is dedicated to Goddess of knowledge and is located in Kollur. It is approximately 3 hours road journey from Udupi to Kollur.

The Sowparnika River originates from Chitramoola at Kodachadri which is the second highest peak of the Western Ghats. Then flows up to the edge of Anthargami region where two more streams called Bhrungisha and Pippalada join it. Then it continues flowing westwards surrounding Kollur reion by the name of ‘Sampara’ and further proceeds to join the sea near the temple of ‘Maharajaswamy’ (Varahaswamy) at Maravanthe. Before it joins the Arabian Sea it meets Varahi River, Kedaka River, Chakra River and Kubja River and becomes one of the biggest rivers in Karnataka. At Maravanthe it creates spectacular scenery and considered only one of its kinds in India. The river Souparnika which almost touches Arabian Sea here makes an U-turn and goes westward to join the sea only after a journey of more than 10 kilometres.

Souparnika River makes an U-turn in the east side of Maraswamy temple and makes many islands called as the Kudru islands. The eastern side view from this point is beautiful with palm trees, green fields and Kodachadri peak visible at the far eastern end making a reflection in the river Souparnika.

It is said that water of Sowparnika River is infused by rich minerals available on Kutachadri hills. It has the essence of 64 Theerthas and 64 medicinal herbs. And that is why people consider a dip in this water very scared.

The legend behind the river says that Varuna king of birds did penance to save his mother from continuous misfortunes and sorrows at the banks of this river. At the location where he is said to have sat in penance, there is a small cave even today which is known as ‘Garuda's Cave’. Then the Kollur Devi or Parvati Devi appeared before him to grant her good wishes and at this juncture this garuda requested Devi that this river be named after him hence forth and thus this river came to be known as river Souparnika.

Depleting condition of the River Sowparnika 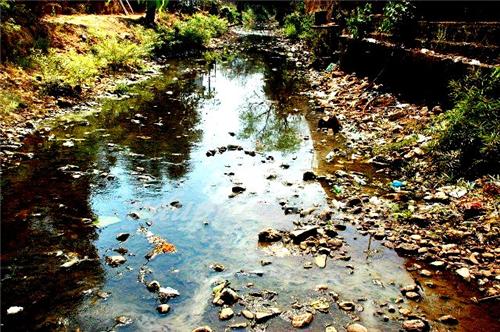 The river known for its spiritual and medicinal values is heavily polluted these days. Untreated waste and plastic bags are choking the Sowparnika River near the Kollur temple. The lack of an underground drainage system and sewage treatment plant is at the root of the problem. The polluted water of River Souparnika flows for about 20 kilometres through the Mookambika Wildlife Sanctuary. Though it risks the health of birds and animals in the sanctuary and many others those consume this water, the river flowing through the forest is nothing short of a spectacular view.

Explore more about Geography of Udupi