Udupi district of Karnataka is full of culture and you can see glimpses of its cultural activities every now and then. People of Udupi not only uphold their culture above all they also take immense pride in several entertainment activities. They perform a folk dance popularly known as the Tiger Dance which is equally famous all over the world. Tiger dance came into existence as part of the Huli Vesha art form. Huli means tiger in local language.

Huli Vesha art has gained its popularity because it signifies the respect, love and affection which a man should show towards a tiger. Since Tiger is believed to have a deep connection with Goddess Sharada, also known as Goddess Durga, who gave us the reason to celebrate Dussera therefore this tiger dance is performed in festivals like Dussera, Krishna Janmashtani, Navratri and Ganesh Chathurti. 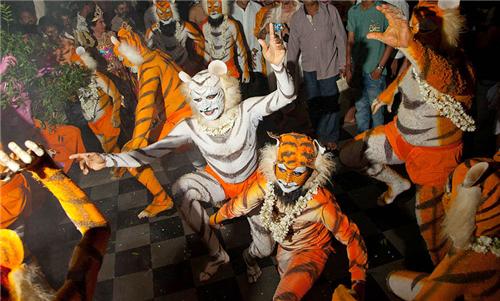 To give the perfect illusion of a tiger dancing, men color their bodies like a tiger. The only clothing they have on them is knickers and the entire body is painted with black and yellow stripes. A thick layer of painting is applied. Yellow, black and red (in mouth) are the colors used to give real-life effect like that of a tiger. They remain the same, with their bodies painted for two days as the festivities go on. The costume also includes a mask; artificially made to look like a tiger’s face.

They also wear a long artificial tail. To make tiger dance more energetic, the dance is spiced up with peppy drum beats. The usage of drums is to make people indoors aware of the performance going on outside and can come out from their houses to see it. A particular rhythm is played on the drums and every single child of Udupi knows it very well. The dance lasts for long hours, therefore artists have to be careful with their dresses and make sure that the colors remain the same and do not get wiped.

Tiger is a carnivore animal and is known as sheep killer. People of Udupi perform the dance with such energy that it represents the same. The most spectacular act is the ‘Killing Sheep’ act which represents the power of tiger when it is in the attacking mode. They also perform several other acts like swinging the mace, picking note with mouth etc.

A minimum of 7 and a maximum of 15 members are there in a single troupe. There can be much larger groups as well. This dance performance has a very significant role in during the festivals and other celebrations. A festival is considered incomplete without this dance from.

During ancient times this dance was done only as a way of praying to Goddess Sharada but today it has taken a whole new form and a large number of village people depend on this art form to earn their livelihood and thus it has become bigger and grander.

As now it is viewed in terms of money it has almost become like a business. This is rightly termed by old people that today’s time is ‘Kalyug’. In earlier times the person who used to perform this dance was considered truly pure and a true devotee of the Goddess but it is not surprising to know that today’s time people who do this dance can be frequently seen consuming beer, wine and meat.

Udupi is trying hard to preserve its culture and tradition and even succeeding to some extent. If you visit Udupi during the time of festivals you will have the golden opportunity to be a part of such enthusiastic festival recalling the times of old the era.